Research and Development in BRICS: An Insightby Exim Bank of India, Occasional Paper No. 168. Export-Import Bank of India, Mumbai, November 2014.
Executive Summary: The basic precept under which the BRICS has been forged as a formal association is to become a more constructive and progressive group in the developing world. BRICS grouping is important for its members in terms of their portrayal of creating for themselves an important role on the global stage. This is underlined by the members sharing a different but common perspective on the global economic order, and a desire to wield greater influence over the rules governing international business and trade. The five economies combined currently hold less than 15 percent voting rights in both the World Bank and the International Monetary Fund, yet their combined strengths are predicted to surpass that of G7 economies in size by 2032. This perhaps was the fundamental point which also gave shape to the idea of a BRCIS Development Bank. With various rounds of discussions having already taken place, it is expected that the member economies would forge important agreements for investments in multiple areas, such as infrastructure, governance, domestic institutions, social programs, and production. The BRICS as a whole is well endowed with a portfolio of wealth – huge agrarian economies, enormous natural resources, a burgeoning services sector, significant human resources, and an ambitious manufacturing sector which is poised to become the hub for the entire world. All these factors provide ample incentives for the BRICS economies to collaborate together and enhance trade among themselves, and also with the rest of the world. ... Globalisation of Research and Development (R&D) has been accelerating since the last few decades through a combination of forces. These include: growth in R&D in emerging economies; off-shoring and outsourcing of R&D to developing regions by developed countries; improved level of collaboration between R&D institutions and end-users of R&D; and growing commercialization of R&D. In the commercial sector, innovation capabilities tend to follow the wealth created by manufacturing, catalyzed by accelerating product development cycles and sometimes by regulation. A country's focus on R&D can be broadly gauged through a set of parameters like research and development expenditure as a percent of GDP, number of researchers (per million people), scientific and technical journals / articles published, and share of high-technology exports as a percent in manufactured exports... 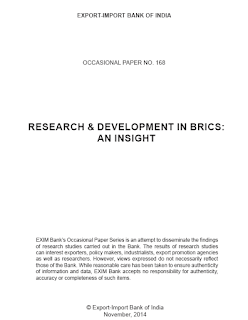 Posted by Anasua Mukherjee Das at 04:32