Structural Change and Industrial Development in the BRICS
Edited by Wim Naudé, Adam Szirmai, and Nobuya Haraguchi. Oxford University Press, 2015, ISBN: 9780198725077.
Overview: This book provides a unique and timely analysis of the role of structural change in the economic development of Brazil, Russia, India, China, and South Africa (BRICS) with a consideration for the role of industry, and in particular manufacturing. The emergence of BRICS reflects an ongoing change in the international economic order. BRICS now account for very substantial part of global GDP, global manufactured value added and global manufactured exports. The book examines their economic experiences and structural change in BRICS over the past three decades, identifying both differences and commonalities, and deriving lessons for other industrializing countries. Section I contains comparative studies focusing on the commonalities and differences of the experiences of BRICS. Section II includes six country studies providing a more detailed analysis of the long-run experiences of each of the countries. Section III consists of a set of seven thematic studies focusing on specific topics such as global value chains, the role of transnational corporations in the food chain, the role of foreign versus domestic investment, the role of domestic versus foreign demand in economic growth the diffusion of environmental energy technology and the similarities, and the differences in industrial policies pursued in the five countries. The book contains a summary chapter that provides an integrated perspective of the various contributions from the point of view of poverty reduction and development. It asks, whether the patterns of structural change and industrial development that BRICS experienced, had an impact on poverty outcomes, and if so, what where the channels and the consequences?
Further Details 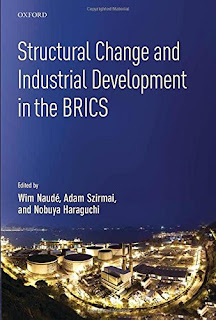 The BRICS and Coexistence: An Alternative Vision of World Order
Edited by Cedric de Coning, Thomas Mandrup, and Liselotte Odgaard. Routledge, 2014, ISBN: 9781138787759.
Overview: The grouping consisting of Brazil, Russia, India and China (BRIC) was initially meant to be nothing more than clever investment jargon referring to the largest and most attractive emerging economies. However, these countries identified with the BRIC concept, and started to meet annually as a group in 2008. At their fourth summit in 2011, they added South Africa to become the BRICS. By then the BRICS had fully morphed from investment jargon to a name for a new economic and political grouping that had the potential to challenge the unipolar hegemony of the United States and its Western allies. This work analyses the extent to which the concept of coexistence explains the individual foreign policies of the BRICS countries. The editors define coexistence as a strategy that promotes the establishment of a rule-based system for co-managing the global order. It recognizes that different states may legitimately pursue their own political and economic interests, but they have to do so within the bounds of a rule-based international system that ensures the peaceful coexistence of states. The BRICS and Coexistence addresses the political dimension of the emergence and influence of the BRICS in the international system and will be of interest to students and scholars of Politics, Development and International Relations.
Further Details 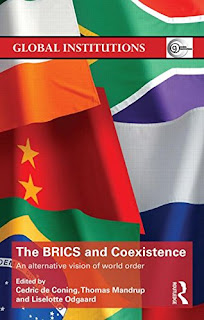 The Rise of the BRICS in the Global Political Economy: Changing Paradigms?
Edited by Vai Io Lo, and Mary Hiscock. Edward Elgar Publishing, 2014, ISBN: 9781782545460.
Overview: Taking an interdisciplinary approach, Vai Io Lo and Mary Hiscock, together with scholars and researchers from around the world, investigate the rise of the BRICS and assess the extent of their further development and influence from the perspectives of economics, international relations and law. Brazil, Russia, India, and China are expected to become the world's most influential economies, surpassing the current richest economies, by the middle of the 21st century. With the inclusion of South Africa in 2010, the BRICS span across four continents, creating an abundance of geopolitical clout, in addition to their potential economic dominance. This book examines the economic developments of individual BRICS countries, the current politico-economic condition of the BRICS vis-à-vis non-BRICS countries or groups, and the potential of the BRICS to bring about changing paradigms in the global political economy. This book is an essential resource for academics, researchers and students who are interested in the rise, development and impact of the BRICS economies. It will also be of interest to economists, political scientists, and specialists in international trade and investment.
Further Details 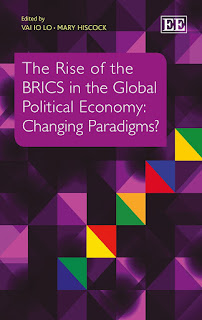 Emerging Markets and the Future of the BRIC Nations
Edited by Ben L. Kedia, and Kelly Aceto. New Horizons in International Business series, Edward Elgar Publishing, 2015, ISBN: 9781783479757.
Overview: In 2008, it appeared that the BRIC nations' economies would continue to provide growth opportunities for businesses of all kinds. After a decade of unprecedented growth, however, Brazil, Russia, India, and China have unexpectedly slowed. In this innovative book, expert contributors diagnose and examine the factors that might be responsible for the changing trends in the BRIC and other emerging market economies and that may determine the future course of these economies and their prospects for sustained growth. This volume offers valuable insights into a wide range of issues pertaining to emerging economies that demand the attention of researchers and practitioners. In particular, contributors explore topics such as the importance of innovation, internationalization trends of emerging market firms, sustainability and social issues, market liberalization and entrepreneurship, consumer behavior and customer relations. Rigorous scholarly research, including empirical work, and perspectives from emerging markets make this an essential resource for doctoral students, business academics and executives, and politicians and policy makers involved in developing nations and their economies.
Further Details 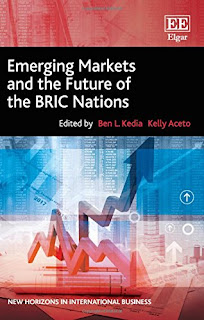 The BRICS: A Very Short Introduction
by Andrew F. Cooper. Oxford University Press, 2016, ISBN: 9780198723394.
Overview: In the wake of the post-Cold War era, the aftermath of 9/11, the 2008 global financial crisis, and the emergence of the G20 at the leaders level, few commentators expected a reshaping of the global system towards multipolarity, and away from the United States. And yet, the BRICS - encompassing Brazil, Russia, India, China and South Africa - has emerged as a challenge to the international status quo. But what is its capacity as a transformative force? And can it provide a significant counter-narrative to the Western-dominated global order?
In this Very Short Introduction, Andrew Cooper explores the emergence of the BRICS as a concept. Drawing on historical precedent, Cooper provides a contemporary analysis of the BRICS' practice and influence as a forum and a lobby group in advancing a distinctive but amorphous agenda amongst global politics.
About The Series: The Very Short Introductions series from Oxford University Press contains hundreds of titles in almost every subject area. These pocket-sized books are the perfect way to get ahead in a new subject quickly. Our expert authors combine facts, analysis, perspective, new ideas, and enthusiasm to make interesting and challenging topics highly readable.
Further Details

Posted by Anasua Mukherjee Das at 08:35