About the Book
This book: "Atal Bihari Vajpayee: Dream for Prosperous India, Science and Technology in Nation-Building" offers for the first time an attempt to understand the scientific profile of a political leader, veteran statesman, who with his modern outlook intended to provide technological solutions to the age-old problems afflicting the Indian society for long. Shri Atal Bihari Vajpayee was the 10th Prime Minister of India, during 1998-2004 yet his half-decade seems to have left an imprint which speaks a much longer period. He fostered an atmosphere of modernity in India. He dreamt India of the 21st Century. As a crusader of the modern science and technology, he accelerated the pace of change, towards the socio-economic development of the nation. This Book covers excerpts of his speeches and writings on science and technology, that have clearly brought out his thought process, priorities and new action plan of modernizing India. He coined the word Jai Vigyan, and added to the then existing slogan of Jai Jawan Jai Kisan. Nuclear Tests Conducted in 1998, during his reign unambiguously established India as a Nuclear Weapons State and the country was able to develop a minimizing credible deterrent to ward-off threat to its security. His penchant for science and technology, as well as broader scientific outlook led to the enactment of national level policy declarations for: Agriculture, Telecom, Water, Health, Population, Textile, Patent modification, Information Technology, Biodiversity, Wild Life Conservation, Science & Technology, etc. Bharat Ratna Shri Atal Bihari Vajpayee firmly believed in the potential of utilising science and technology, towards making India, a strong, modern, prosperous and resurgent nation in the world.

About the Author
Dr. Pawan Sikka (b. 1944), during the era of Vajpayee's government, 1996-2004, was Scientist-G/ Advisor, Government of India, Department of Science and Technology (DST), Ministry of Science and Technology, New Delhi, and there he witnessed the progress made in the field of science and technology, towards the emergence of prosperous India, besides its interactions with the global scientific world. During his dynamic years, 1974-2004, Dr. Pawan Sikka has held various senior technical positions in DST.
He has received his M.Sc, PhD; as well as, DSc. degrees in Physics. He was awarded Visiting Fellowship by the British Government, as British Scholar, for the academic year 1984-85, for undertaking Science Policy Studies concerning Science & Technology, Society and Development. He is also recipient of UNESCO, Swiss, German and Italian government scholarships for pursuing further studies there in the new and emerging fields of science and technology. He is best known for his contributions to science policy studies in India and abroad. He is a life-member of the MaterialsResearch Society of India; Semi-conductor Society of India; Association of British Scholars, and Oxford and Cambridge Society of India.
Further Details 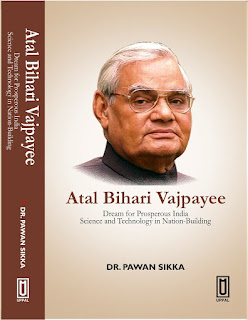 Posted by Anasua Mukherjee Das at 00:02