Overview: In the wake of the post-Cold War era, the aftermath of 9/11, the 2008 global financial crisis, and the emergence of the G20 at the leaders level, few commentators expected a reshaping of the global system towards multipolarity, and away from the United States. And yet, the BRICS - encompassing Brazil, Russia, India, China and South Africa - has emerged as a challenge to the international status quo. But what is its capacity as a transformative force? And can it provide a significant counter-narrative to the Western dominated global order?
In this Very Short Introduction Andrew Cooper explores the emergence of the BRICS as a concept. Drawing on historical precedent, Cooper provides a contemporary analysis of the BRICS' practice and influence as a forum and a lobby group in advancing a distinctive but amorphous agenda amongst global politics.

About the Series: The Very Short Introductions series from Oxford University Press contains hundreds of titles in almost every subject area. These pocket-sized books are the perfect way to get ahead in a new subject quickly. Our expert authors combine facts, analysis, perspective, new ideas, and enthusiasm to make interesting and challenging topics highly readable. 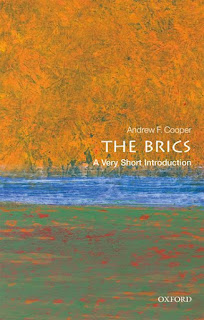 Posted by Anasua Mukherjee Das at 07:31