OA eBook | India Soars High: Key policies of the Indian Government and Their Impact on Business | by KPMG in India, 2016

Foreword
India has long been viewed as a potential economic tiger that is yet to achieve its potential. Myriad regulations and the intricate federal structure of the government inhibited business growth and held back India from achieving its expected economic potential.
However, that appears to be changing gradually. The state governments, in lockstep with the central government, have unveiled several reforms and changes that have made it comparatively easier to do business in India, than ever before. And this is not a one off process by the state governments. The process has been institutionalised by the Department of Industrial Policy and Promotion, Government of India, under the ranking mechanism on adoption of business reforms, supported by the World Bank and various industry associations. This mechanism has been widely acknowledged as a game changer in transforming India in terms of ease of doing business.
The Indian economy itself has shown resilience in the face of global downturns, and has stood up to be one of the fastest growing economies in the world. The performance of the USD2 trillion-economy at current price is being keenly observed by the world. During FY2014-15, India's domestic consumption and investment contributed a growth of 57 per cent and 33.1 per cent, respectively, to the Gross Domestic Product (GDP). In itself, that played a significant role in keeping India's economic sentiments charged up. And now that India's GDP growth forecast for 2016 is slated to be 7.5 per cent, India is firmly on its way to catapult into a global growth engine. This growth rate also makes India one of the fastest growing large economy in the world.
I am happy to note that the growth of over 7 per cent GDP in FY2015-16 presents India's case strongly to the global investors. One of the world's fastest-growing economies, India is opening up a world of opportunities for investments, in a significantly conducive and supportive environment. In 1H FY2015-16, India received FDI of USD16.63 billion, an increase of about 13 per cent to the corresponding period in the previous fiscal year. Investments into India are accelerating, demonstrating increased investor confidence on what India has to offer. And the government is working hard to significantly reduce the red tape.
In addition, Government of India has launched various ambitious national programmes that present significant opportunities for investors to be part of one of the largest infrastructure programmes in the world. These programmes are expected to transform not only the cities and the country as a whole, but also the way business is done in India. Some of the infrastructure plans are trans-national and would help India economically integrate more firmly and rapidly with the regional economies. Proactive policy reforms along with several campaigns and initiatives, such as Make in India, Digital India, Skill India, Start-up India and Swachh Bharat Abhiyan (Clean India Mission), are likely to transform the extent and the quality of rural and urban infrastructure.
These steps are expected to bring forth a number of investment opportunities. For example, the initial corpus of USD6.2 billion by the National Investment and Infrastructure Fund (NIIF) is expected to bridge the investment gap in infrastructure, which would be addressed by FDI and private investments. Further, the investments planned for the Indian Railways, as an example, is USD133.5 billion over the next five years ending 2019. And, for roads, the investments planned is USD32.4 billion during the twelfth Five Year Plan (FYP) during 2012-17. In a scenario, where the nominal GDP is expected to reach USD3.4 trillion by FY2019-20 and further, to USD7 trillion by FY2024-25, the stakes for the return on investments is expected to be significantly high. It is certainly the right time to invest in India.
This positive sentiment is reflected by the International Monetary Fund (IMF) forecast for India's economic growth at 7.3 per cent for 2015 and 7.5 per cent for 2016. This report 'India soars high' by KPMG in India, gives an insight about the state of the Indian economy from an investor's perspective and I am positive that it would help investors in their decision-making process while strategising their investments in India.
I hope this report gives you a better understanding of the rapidly changing business outlook for India and I take this opportunity to wish you the best for the New Year 2016.
Richard Rekhy | Chief Executive Officer | KPMG in India
Table of Contents 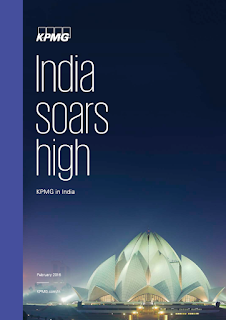