The course is about finding solutions and redefining our living scheme to be in symbiosis with nature.

An Interdisciplinary Course on Planet Science and Non-Invasive Technology, being taught for the first time at any University.

If we want to work with the planet we have to understand how the planet works. The course is about designing a non-invasive scheme of living. How? By understanding how the planet works and how our production practice has been destroying it for 200 years. By moving technology to a new level to avoid this. Commentary on the main text "Naturally: Tread Softly on the Planet", by Vikram Soni, Harper Collins, 2015. A non-credit course, School of Social Sciences and Transdisciplinary Research Cluster on Sustainability Studies, JNU Contact: Vikram Soni Email: vsoni.physics@gmail.com Mobile: +91-9899821135.

The first part is about what we are and how we got here. The course will look, with new perspective, at how nature works. How it provides a scheme of living and a production system that has no waste, is self-sustaining and integral. In the part we look at what we have done. We look into the production system we have invented through technology that is contrary to nature's and find that the scale of consequence of this technology has grown beyond the planet's capacities. This derives strongly from the market driven ideology that fuels consumption. We suggest reform and deal with contradictions in the Local versus the Global. Next, the course will walk you through the major contemporary problems of threshold loss, climate change and population growth. The latter part of the course is about finding solutions and redefining our living scheme to be in symbiosis with nature. Transition suggests moving to natural cycle technology, with explicit examples. Next, the energy landscape is assessed with some natural wisdom – looking not just at renewable source for energy, but renewable apparatus and non-invasive waste. The final part is about the living natural resource bequeathed to us by evolution and the great value in using it non-invasively. Here we give new and operational solutions on sourcing water and drinking water for cities. Last, we consider nature's rights as a must for human suvival; placing values in line with preserving nature and the progress on this front. Simple Scientific models for evolutionary networks and biodiversity and on climate will be given for the interested students. Further new, non-invasive solutions using local nature resource, particularly for water in cities, will also be given .

Prof. Soni is presently UGC Professor at the Centre for Theoretical Physics, at Jamia Millia Islamia. He was awarded a PhD in Physics at the University of California, Santa Barbara, in 1976. He has been faculty at Sussex University, UK from 1976 to 1978, after which he was at the University of Madras till 1983. In 1983 he went to the Institut de Recherche Fondamental at Saclay in Paris, followed by two years at the University of Regensburg in Germany at UC Berkeley. He then worked at the Institut du Physique Nuclaire at the University of Paris in Orsay, as a visiting Professor, before returning to India as UGC Professor at the National Physical Laboratory in 1989, where he worked till 2009. He has worked mainly in High Energy Physics and Astrophysics. In Physics, he has made seminal contributions in our understanding of phenomena ranging from the nucleon to neutron stars and from the matter-antimatter puzzle to evolutionary networks. More significantly he has produced a body of work in public interest science that deals with non invasive, 'Preserve and Use', solutions to contemporary problems, particularly the water problems. This work is published in prestigious science journals. Acting on his convictions, he has worked tirelessly to protect living natural resource both with the courts and government. The Aravalli biodiversity park in Delhi exists thanks to these efforts. The protection and moratorium on building on the floodplain of the river Yamuna followed from the novel natural water storage scheme proposed by him and co-workers. 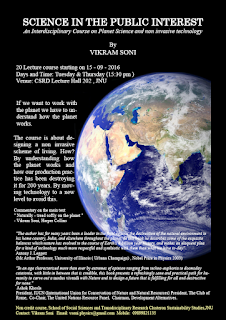 Text for the course

Naturally: Tread Softly on the Planet

A Survivors' Guide for the Planet

If we stop all emissions today will the Arctic and the glaciers stop melting? The answer is no. Will the sea rise that is submerging the coral Eden of the Maldives stop? No. The reason is simple. Even if we change the profile of the atmosphere to be greenhouse friendly, the time for changing the temperature of the air and sea, from the present rise to a decline, will be at least another 50 years. It is foregone that a third of the Maldives, most or all of the Arctic and a large part of the glaciers will recede, but may come back if we behave for the next 100 years. However, the species that have gone extinct will not come back. While global warming and carbon emissions made up much of the sky in Copenhagen, dwindling rivers, disappearing lakes and vanishing forests are all on hold, just waiting to be unleashed. It is a much larger angle than will be seen from the window of Copenhagen. The landscapes, the seas and even the air that we breathed as children are fading into memory. Since the trouble is on the planet, we have to really start by finding how the living planet works. We have to dig deeper into the past, to the evolution of life on the planet, to find out where we are coming from. This book sets the direction by placing human interventions in the matrix of life on earth. From there it gathers wisdom to walk in symbiosis with the planet. In fact, the 'Green' technologies that are in currency are only about mitigation of the harm we have already caused, yet very far from an encompassing answer. We need a radical shift from invention and production into 'preserve and use' non-invasive technology. The book is about our future, about a holistic scheme of living. Both the human being and the planet are evolutionary beings, as are plants, seeds and geological formations that make our rivers, aquifers and forests. They are all symbiotically linked by evolution.. They all enter into natural cycles that keep the planet stable. It is biodiversity that repeatedly makes the waste of one species the food for another, to close the chain and make a natural cycle. In the first part of the book we start by understanding these fundaments of the life process that hold the planet in a steady state. In the following part we focus on how the human being has invented for the sake of invention and more recently, the global market. We have dumped enough waste to make waste of the planet, from an endless list of over-indulgent inventions. All of them come with good science and technology but end up being no good for the planet. We have strayed away from the natural wisdom in nature where invention is integrated into cycles to banish waste. The entire evolutionary network of life on the planet, created by millions of years of evolution, is being taken out. We have to act now. That is exactly what the book does – look for enlightened solutions that are not injurious to the planet. The next part of the book goes beyond the present, to a template for a change to a non invasive scheme of living. It has symbiotic solutions that build into natural cycles, is about understanding evolutionary resource and how to preserve and use it and guarding nature's resource for human survival. Finally, none of this can work unless it comes from deep within our consciousness. It is about our ethos, the values of conservation, the ideology of living. We conclude by recalling the ancient idea of Ahimsa, which is non-violence toward all living things. The ancient philosophy of respect for all life has suddenly transformed into an essential for preserving biodiversity.

I History of the Planet

1. The Creation of Natural Cycles

2 How the planet maintains a Steady State with respect to atmosphere composition and temperature, salt content of sea water etc. Homeostasis Cycles, zero waste production and a Steady State are maintained by Biodiversity

3. A model of how biodiversity is necessary to stabilize evolutionary networks

6 The Dialectic: Ideology and Technology

7 The Global and the Local | Disturbing The Earth - Contemporary Dilemmas

10 Population Up and Megacities

12 Energy Mitigation: The Energy Landscape | A full discussion of the energy in totality including cost and environmental costs – wastes, Nuclear, Solar, Wind, Wave and Tidal and Biofuels

13 Evolutionary Resource: Seeds, Plants, Rivers and their floodplain aquifers, ground aquifers Forests etc. | Preserve & Use of Evolutionary Resource - The new non invasive technology with examples. The River floodplains as a large scale non invasive source of water that has natural storage and recharge, worth ~ a billion dollars a year just in Delhi. How each city can source mineral water from its forest areas – the Delhi ridge , Banergatta forest, Bangalore …in a non invasive way worth a ~ billion dollars a year.

Reviews of the Book

"The author has for many years been a leader in the fight against the destruction of the natural environment in his home country, India, and elsewhere throughout the planet. In this book he describes some of the exquisite balances which nature has evolved in the course of Earth's 4-billion year history, and makes an eloquent plea for a kind of technology much more respectful and symbiotic with them than what we have to-day". Antony J. Leggett (Mc Arthur Professor, University of Illinois (Urbana Champaign), Nobel Prize in Physics 2003)

"In an age characterised more than ever by extremes of opinion ranging from techno-euphoria to doomsday catatonia, with little in between that is credible, this book presents a refreshingly sane and practical path for humanity to carve out a modus vivendi with Nature and to design a future that is fulfilling for all and destructive for none." Ashok Khosla, President, IUCN (International Union for Conservation of Nature and Natural Resources) President, The Club of Rome, Co-Chair, The United Nations Resource Panel, Chairman, Development Alternatives.

More About the Book

Posted by Anasua Mukherjee Das at 05:10