New Book | The Politics of Innovation: Why Some Countries Are Better Than Others at Science and Technology | by Mark Zachary Taylor, OUP, 2016

The Politics of Innovation: Why Some Countries Are Better Than Others at Science and Technology
by Mark Zachary Taylor, Oxford University Press, 2016, Paperback, 441 pages, ISBN: 9780190464134.
About the Book
Why are some countries better than others at science and technology (S&T)? Written in an approachable style, The Politics of Innovation provides readers from all backgrounds and levels of expertise a comprehensive introduction to the debates over national S&T competitiveness. It synthesizes over fifty years of theory and research on national innovation rates, bringing together the current political and economic wisdom, and latest findings, about how nations become S&T leaders. Many experts mistakenly believe that domestic institutions and policies determine national innovation rates. However, after decades of research, there is still no agreement on precisely how this happens, exactly which institutions matter, and little aggregate evidence has been produced to support any particular explanation. Yet, despite these problems, a core faith in a relationship between domestic institutions and national innovation rates remains widely held and little challenged. The Politics of Innovation confronts head-on this contradiction between theory, evidence, and the popularity of the institutions-innovation hypothesis. It presents extensive evidence to show that domestic institutions and policies do not determine innovation rates. Instead, it argues that social networks are as important as institutions in determining national innovation rates. The Politics of Innovation also introduces a new theory of "creative insecurity" which explains how institutions, policies, and networks are all subservient to politics. It argues that, ultimately, each country's balance of domestic rivalries vs. external threats, and the ensuing political fights, are what drive S&T competitiveness. In making its case, The Politics of Innovation draws upon statistical analysis and comparative case studies of the United States, Japan, South Korea, China, Taiwan, Thailand, the Philippines, Argentina, Brazil, Mexico, Canada, Turkey, Israel, Russia and a dozen countries across Western Europe.
Table of Contents 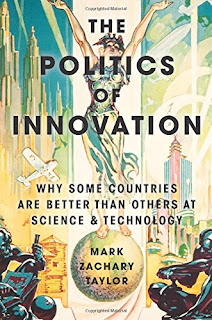