New Book | The Ethics of Invention: Technology and the Human Future | by Sheila Jasanoff

The Ethics of Invention: Technology and the Human Future
by Sheila Jasanoff. W.W. Norton & Company, 2016, 320 pages, ISBN: 9780393078992.
About the Book
We live in a world increasingly governed by technology—but to what end?
Technology rules us as much as laws do. It shapes the legal, social, and ethical environments in which we act. Every time we cross a street, drive a car, or go to the doctor, we submit to the silent power of technology. Yet, much of the time, the influence of technology on our lives goes unchallenged by citizens and our elected representatives. In The Ethics of Invention, renowned scholar Sheila Jasanoff dissects the ways in which we delegate power to technological systems and asks how we might regain control.
Our embrace of novel technological pathways, Jasanoff shows, leads to a complex interplay among technology, ethics, and human rights. Inventions like pesticides or GMOs can reduce hunger but can also cause unexpected harm to people and the environment. Often, as in the case of CFCs creating a hole in the ozone layer, it takes decades before we even realize that any damage has been done. Advances in biotechnology, from GMOs to gene editing, have given us tools to tinker with life itself, leading some to worry that human dignity and even human nature are under threat. But despite many reasons for caution, we continue to march heedlessly into ethically troubled waters.
As Jasanoff ranges across these and other themes, she challenges the common assumption that technology is an apolitical and amoral force. Technology, she masterfully demonstrates, can warp the meaning of democracy and citizenship unless we carefully consider how to direct its power rather than let ourselves be shaped by it. The Ethics of Invention makes a bold argument for a future in which societies work together—in open, democratic dialogue—to debate not only the perils but even more the promises of technology.
About the Author
Sheila Jasanoff is professor of science and technology studies at Harvard Kennedy School. She is the author of many books on technology, most recently Science and Public Reason and Designs on Nature. She lives in Cambridge, Massachusetts. 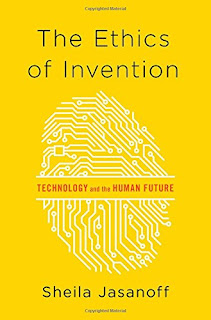