A Voice for Science in the South
Edited by Daniel Schaffer. World Scientific Publishing, 2015, hardcover, 252 pages, ISBN: 9789814740425.
About the Book
Science in the developing world has experienced historic change over the past 30 years. Nations that lacked resources for even basic science have since developed world-class research centres. Men and women who previously had no chance of pursuing scientific careers in their own countries now thrive in home-grown universities and laboratories dedicated to scientific excellence.
The World Academy of Sciences (TWAS) has been front and centre during this remarkable transformation. A Voice for Science in the South tells the story of TWAS through the eyes of 11 eminent scientists associated with the Academy. They speak of the organization's challenges and triumphs, and describe what TWAS has meant for their careers and the careers of thousands of scientists in the developing world. They also explore the challenges that lie ahead for TWAS and, more generally, for science in the South. It is a story of unprecedented global change and an account of what must be done to ensure that all nations can share in the benefits that emerge when science is woven into the fabric of society.
Table of Contents 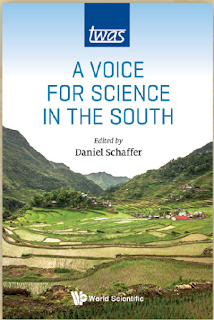 Key TWAS leaders reflect on the history of science in the developing world – and the history and future of TWAS – in a new book. In 11 inspiring essays, TWAS leaders detail the Academy's triumphs and challenges in advancing science for the developing world.
Thirty years after the first TWAS General Meeting, a new book explores the Academy's past and future in a series of essays by TWAS leaders and prominent Fellows from the developing world. "A Voice for Science in the South" serves as window into one of the most significant changes of our era: how nations once trapped in poverty have invested in science, technology and education to drive development and improve human conditions. The book "will serve as a lasting reminder of the commitment that motivated Abdus Salam, Paolo Budinich and the others who founded the Academy and guided its work for the first 30 years," writes TWAS President Bai Chunli in the Foreword. "Though the world may change, their ideals remain constant. At the same time, this volume reminds us of the hard work and creativity that will be required to build on their legacy, so that TWAS remains an effective leader and advocate for science in the service of human progress."
"A Voice for Science in the South" was edited by Daniel Schaffer, the former TWAS public information officer, and published by Singapore-based World Scientific. In an introductory essay, Schaffer reflects on the vision and commitment of Salam, the Pakistani physicist who founded the International Centre for Theoretical Physics (ICTP) in 1964 and won the Nobel Prize in 1979. Following that reflection are essays by four pioneering TWAS leaders: former Presidents José I. Vargas of Brazil; C.N.R. Rao of India; and Jacob Palis of Brazil; and longtime Executive Director Mohamed H.A. Hassan of Sudan. "A Voice for Science in the South" also features essays by: