Modi Doctrine: The Foreign Policy of India's Prime Minister
by Sreeram Chaulia. Bloomsbury India, 2016, Hardcover, 268 pages, ISBN: 9789386141156.
About the Book
Since becoming India's prime minister in 2014, Narendra Modi has been a tour de force in foreign policymaking. A vastly experienced administrator who has held key public positions as chief minister of an Indian state for more than a decade and now as prime minister, he has always seen value in foreign affairs and devoted special attention to it with his unique entrepreneurial flair and coherent set of ideas. Every realm of Indian foreign policy commercial diplomacy, defence diplomacy, diaspora outreach, cultural diplomacy, geostrategy and soft power has been transformed by him with a sense of destiny not witnessed in recent memory. Indians and people the world over have noticed his star presence and are asking questions like:
This book provides the answers by delving into the mind and method behind Narendra Modi's avatar as India's diplomat-in-chief. It argues that under his able watch, India is heading toward great power status in the international order.
About the Author
Sreeram Chaulia is Professor and Dean at the Jindal School of International Affairs, O.P. Jindal Global University, in Sonipat, India. He is an eclectic political scientist specialising in both international security and international political economy. He is a contributing editor of People Who Influenced the World (Murray Books, Adelaide, 2005) and the sole author of International Organizations and Civilian Protection: Power, Ideas and Humanitarian Aid in Conflict Zones (I.B. Tauris, London, 2011) and of Politics of the Global Economic Crisis: Regulation, Responsibility and Radicalism (Routledge, New Delhi, London and New York, 2013). He received education from St. Stephen's College, Delhi University; University College, Oxford University; The London School of Economics and Political Science, University of London and the Maxwell School of Citizenship and Public Affairs, Syracuse University. He is a leading opinion columnist for Indian newspapers- the Economic Times and the Asian Age- on world affairs and a commentator on international current issues on radio and television in India and abroad. He has worked as an international civilian peacekeeper in the warzones of Sri Lanka and the Philippines. 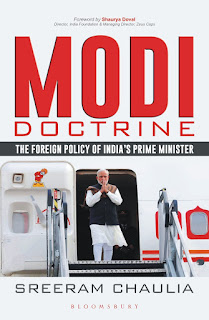