About the Book
Vigyan Prasar, Department of Science and Technology (DST) in collaboration with CSIR-NISCAIR, has developed inspirational film titled "Scientifically Yours" on Indian Women Scientists who have contributed significantly to Indian Science. The films on Indian women scientists are unique one as this section of society has not been sufficiently covered in the country. This is a collective effort of the institutions to bring the women legend scientists on to the centre stage and highlight their achievements and contributions.
A Curtain Raiser of the films was screened in the presence of media persons along with other invited guests from scientific institutions and laboratories. The would help in creating role models for students and researchers especially for girl students and motivate them in pursuing careers in basic and applied sciences. The women scientists of eminence have been identified from various fields of research such as Physical sciences, Biological sciences, Chemical sciences, Immunology, Agriculture etc. The films have been produced in discussion mode at CSIR–NISCAIR studio.
The book presents transcripts of their interviews broadcasted on Rajyasabha Television. The book covers interviews of following Women Scientists: 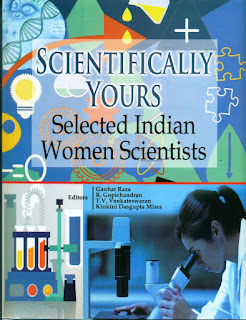