To be released soon
Innovation and Its Enemies: Why People Resist New Technologies
by Calestous Juma. Oxford University Press, New York, Hardback, 432 Pages, ISBN: 9780190467036.Description: The rise of artificial intelligence has rekindled a long-standing debate regarding the impact of technology on employment. This is just one of many areas where exponential advances in technology signal both hope and fear, leading to public controversy. This book shows that many debates over new technologies are framed in the context of risks to moral values, human health, and environmental safety. But it argues that behind these legitimate concerns often lie deeper, but unacknowledged, socioeconomic considerations. Technological tensions are often heightened by perceptions that the benefits of new technologies will accrue only to small sections of society while the risks will be more widely distributed. Similarly, innovations that threaten to alter cultural identities tend to generate intense social concern. As such, societies that exhibit great economic and political inequities are likely to experience heightened technological controversies.
Drawing from nearly 600 years of technology history, Innovation and Its Enemies identifies the tension between the need for innovation and the pressure to maintain continuity, social order, and stability as one of today's biggest policy challenges. It reveals the extent to which modern technological controversies grow out of distrust in public and private institutions. Using detailed case studies of coffee, the printing press, margarine, farm mechanization, electricity, mechanical refrigeration, recorded music, transgenic crops, and transgenic animals, it shows how new technologies emerge, take root, and create new institutional ecologies that favor their establishment in the marketplace. The book uses these lessons from history to contextualize contemporary debates surrounding technologies such as artificial intelligence, online learning, 3D printing, gene editing, robotics, and drones. It ultimately makes the case for shifting greater responsibility to public leaders to work with scientists, engineers, and entrepreneurs to manage technological change, make associated institutional adjustments, and expand public engagement on scientific and technological matters.

About the Author
Calestous Juma, Professor of the Practice of International Development and Director of Science, Technology, Globalization, Belfer Center for Science and International Affairs, Harvard University.
Calestous Juma, a national of Kenya, is an internationally-recognized authority on the role of science, technology and innovation in economic development. He is Professor of the Practice of International Development and Director of the Science, Technology, and Globalization Project at Harvard Kennedy School. He directs the Agricultural Innovation in Africa Project funded by the Bill and Melinda Gates Foundation and serves as Faculty Chair of Harvard's Innovation for Economic Development executive program. Juma is a former Executive Secretary of the UN Convention on Biological Diversity and Founding Director of the African Centre for Technology Studies in Nairobi. He was Chancellor of the University of Guyana and has been elected to several scientific academies including the Royal Society of London, the US National Academy of Sciences, the Academy of Sciences for the Developing World, the UK Royal Academy of Engineering and the African Academy of Sciences.


Related News: Why do people resist new technologies? History might provide the answer | by Calestous Juma 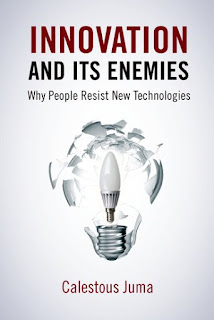