Cycles of Invention and Discovery: Rethinking the Endless Frontier
Speaker: Prof. Venkatesh Narayanamurti
Benjamin Peirce Research Professor of Technology and Public Policy at Harvard
Date: December 8, 2016 | 5:30 pm
Venue: Seminar Hall, IIT Delhi
Abstract:
In this talk I will reflect om the genesis of the Information and Communications revolution and through an analysis of the hard case of Nobel Prizes in Physics to show that the causal direction of scientific discovery and radical invention are often reversed. They often arose in a culture of so called "applications oriented research" in industrial laboratories and will use those examples to enumerate the key ingredients of highly successful R&D institutions. My views have been shaped by my own personal experiences in industrial research, U.S National Laboratories and research intensive universities. By exploring the daily micro-practices of research, I will show how distinctions between the search for knowledge and creative-problem solving break down when one pays attention to how path breaking research actually happens. I will highlight the importance of designing institutions which transcend the 'basic-applied' dichotomy and contrasting them with models of the classic but still influential report Science, The Endless Frontier. The need for new integrative institutions to address global challenges such as climate change and alternative energy sources will be discussed.
About the speaker:
Venkatesh Narayanamurti is the Benjamin Peirce Research Professor of Technology and Public Policy at Harvard. He has served on numerous advisory boards of the federal government, research universities and industry. He was formerly the John L. Armstrong Professor and Founding Dean of the School of Engineering and Applied Sciences, Professor of Physics and Dean of Physical Sciences at Harvard. From 2009 to 2015 he served as the Director of the Science, Technology and Public Policy Program at the Harvard Kennedy School. He has a Ph D in Physics from Cornell University and a Honorary DSc from Tohoku University. He is the author of more than 240 scientific papers in different areas of condensed matter and applied physics. He lectures widely on solid state, computer, and communication, and energy technologies, and on the management of science, technology and public policy. He is a fellow of the American Academy of Arts and Sciences, and an elected member of the U.S National Academy of Engineering and of the Royal Swedish Academy of Engineering Sciences. He served as the Foreign Secretary of the U.S National Academy of Engineering from 2011 to 2015. 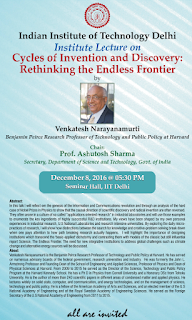