Press Release
New Delhi, July 11, 2016: Alappuzha, Panaji and Mysuru are three of the cleanest cities in India, with municipal waste management systems that actually work – says a latest rating by Centre for Science and Environment (CSE). The three cities will be awarded CSE's Clean City Award here today by the Union urban development minister M Venkaiah Naidu.
Mr Naidu will also officially release CSE's latest report on solid waste management in Indian cities, titled Not in my backyard. CSE director general Sunita Narain said: "This book started as a survey—we wanted to know simply which city is India's cleanest. We knew that once we found out which is the cleanest, we would also find out what makes it so. This would give us the answers for future policy."
Apart from several new and exciting findings, what also became clear was the imperative need for policy changes in garbage management. CSE had assumed that this was a much-researched area, which, however, was not the case. The last survey to understand quantity and composition was done over a decade ago. The methodology used to calculate waste generated is to simply extrapolate an assumed quantity estimate with the population. There is however no real on-ground data available. In addition, not much information is available on the composition of waste regarding organic, bio-degradable, or plastic, or the quantum. In essence, what had started as a survey was turning out into a gap analysis.
In 2007, the Comptroller and Auditor General of India (CAG) published a damning report on the "first generation" of solid waste management and a lack of compliance with MSW (Municipal Solid Waste) Rules. The report found waste was collected in 22 per cent of 56 sampled municipalities, segregation was done in 10 per cent, storage in 17 per cent, transportation using covered trucks was done in 18 per cent of the sampled municipalities and only 11 per cent had waste processing capabilities. The report also found that only six municipalities had landfills—others were dumping in open sites.
As an example of how bad things were, in December 2006, a convoy of garbage trucks working for the Kochi municipality, was caught in Bandipur national park in the neighbouring state of Karnataka, smuggling waste from the city for illegal dumping in the forest.
According to Central Pollution Control Board (CPCB) estimates, over 90 per cent of Indian cities with a functional collection system dispose of their waste in landfills. These landfills are not made according to stipulated sanitary standards. In 2008, CPCB's monitoring of cities found that 24 out of 59 cities were making use of landfills, covering 1,900 hectares of land. Another 17 planned to create landfills. Since land was becoming scarce within city limits, municipalities were looking for "regional sites" to dump their waste.
In 2009, the Department of Economic Affairs's position paper on solid waste management argued that urban India was already producing some 80,000 MT of waste a day. It projected that by 2047, India would be producing 260 million tonnes of waste annually needing over 1,400 sq km of landfills. This is an area equal to Hyderabad, Mumbai and Chennai put together.
CSE deputy director general Chandra Bhushan said: "As India becomes more literate and politically aware, most cities are encountering stiff resistance when they attempt to dispose of waste in somebody else's backyard. In Pune, Bengaluru, Panaji, Alleppey and Gurgaon, village communities have been up in arms against the dumping of waste by a neighbouring city. This resistance will continue to grow. Cities are also finding it difficult to secure 'environmental approval' for their landfills."
Sunita Narain said: "What is absolutely clear to us as we researched for this report is that technology for waste disposal is not the problem. The problem is two-fold. One, households and institutions are not responsible for management, through segregation or payment of the waste they generate. Two, there is an absolute collapse of financial and institutional (human) capacity and so accountability in our municipal systems."
"In this scenario, the best option is what we have found exists in Kerala, where municipalities have withdrawn from the waste business. People segregate and compost; informal recyclers collect and sell. This is perhaps the most exciting model for future waste business in the country. And even if it cannot be emulated completely, it holds important lessons for other cities," added Narain.
The book release and the Clean City Awards will be followed by a day-long workshop on July 12th, 2016, to share best practices from across the country in solid waste management. Representatives from the cities rated by CSE, municipal authorities and regulators, media people and civil society functionaries will come together to deliberate on the three key phrases of the workshop -- Reinvention, Opportunities and Way Ahead. 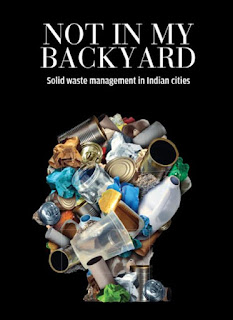