Foreword by M. Hamid Ansari, Vice-President of India
When RSTV started the program 'Moments of Eureka', which showcased the life and the work of noted Indian scientists, I was very happy for two reasons. One, that RSTV was taking a step forward in fulfilling its mandate of being a knowledge channel for the country, and two, that the program would highlight and bring into focus the continued contribution of our scientists to nation building,which had not received its due attention. Over the past two years, this program has interviewed over 100 scientists who have excelled in their chosen fields.
The program is intended to inspire the younger generation in celebrating science and exploring a career in science. It brings home the message that for a nation to progress, it needs its brightest minds devoting their attention to solving problems of fundamental as well as practical nature. The program has also highlighted the important role played by our scientific and research institutions which provide the required facilities and congenial environment, enabling the scientists to continue with their work.
Spreading and promoting scientific temper is our Constitutional duty. The phrase 'Scientific Temper' with its current attributes was first articulated by Pandit Jawaharlal Nehru in his book 'Discovery of India' wherein he said that "scientific approach and temper are, or should be, a way of life, a process of thinking, a method of acting and associating with our fellowmen".
The quality and sustainability of the program has been the result of the collaborative efforts of three institutions, namely, CSIR-NISCAIR, RSTV and Vigyan Prasar. The decision to transcribe and publish 53 select interviews of eminent scientists in a book form will increase the reach and shelf life of the ,message that the program seeks to convey. I wish to congratulate and offer my best wishes to all who have been associated with the production of this series and preparation of this publication. 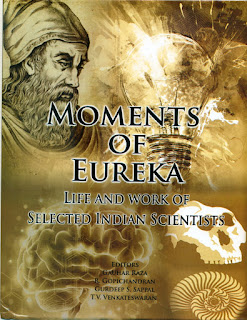 Posted by Anasua Mukherjee Das at 00:07