About the Book:
The green growth discourse proffers a world of scientific insight, engineering sophistication and managerial smartness that purports to redress the accumulated harms and impending consequences of "old" industrialisation. It encompasses strategies ranging from geo-engineering to myriad modest proposals that, collectively, may be referred to as an "efficiency strategies." Through such instrumentalities, green growth promises to stem the environmental crisis and mitigate its consequences while addressing persistent challenges to the emancipation of human beings from destitution and disempowerment.
Green growth, the Secretary-General of the OECD declared, "means fostering economic growth and development while ensuring that natural assets continue to provide the resources and environmental services on which our well-being relies" (OECD, 2012: 8). Another influential voice reflecting on the "green economy," notes that it enables "growth, social progress and environmental stewardship" (UNDESA: 20011: v). This foundational emphasis on continued growth, as a prerequisite to politically acceptable options is situated within an acknowledgement of ecological limits, with the assertion that the "objective of the green economy is to ensure that those limits are not crossed" (UNDESA, 2011: vi, also see WCED, 1987).
Such assertions notwithstanding, the fact is that ecological limits have already been breached even while a modicum of well-being for all remains a far cry. Humanity's "ecological footprint" exceeds the earth's biocapacity and uses up stocks and sinks faster than the earth is able to replenish them (Global Footprint Network, 2012). Despite the overwhelming evidence of already breached limits, green growth advocates assert a strategy of more growth based on greater efficiency and technological innovation. It presumes that productivity gains will negate overall increments in energy and material throughput necessitated by more growth. This strategy is not new and has long been recognised in the environmental literature as an underlying rationale of the "ecological modernisation" (Mol and Spaargaren, 2000) approach that emerged in the 1970s. While greater productivity is on balance preferable to its opposite, because it enables doing more with less, it is a self-deception to think of it as an adequate response to the social and environmental challenges of greater fairness on a finite planet that confront us (e.g. Wilhite & Norgard, 2004; York & Rosa, 2003, and many others).
Against this evidence, what explains modern society's abundant faith and investment in "green growth"? This book is an effort to answer that question. It sifts through the ideological commitments, policy choices and the resulting political economy that have shaped the contemporary world, and searches among them for narratives that rationalise an idea that in its essence was identified, accurately in our view, as an "impossibility theorem" (Daly, 1990). The book then trains its focus on the alternatives to green growth.

Table of Contents
Part I: Contradictions of green growth
1. Can green growth really work? A reality check that elaborate on the true (socio-)economics of climate change | Ulrich Hoffmann
2. What is the "green" in "green growth"? | Larry Lohmann
3. The how and for who of green governmentality | Adrian Parr
4. Degrowth and the roots of neoclassical economics | James Meadway 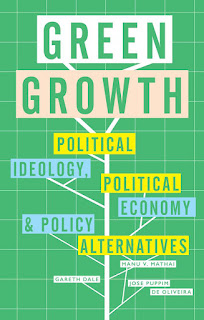