New Book | "The Conflicted Superpower: America's Collaboration with China and India in Global Innovation" | by Andrew B. Kennedy, CUP

The Conflicted Superpower: America's Collaboration with China and India in Global Innovation
by Andrew B. Kennedy, Columbia University Press, 2018, Hardback, ISBN: 9780231546201.
About the Book: Innovation is globalizing. Cross-border flows of brainpower have reached unprecedented heights, while multinationals invest more and more in high-tech facilities abroad. In this new world, the technological leadership of the United States increasingly involves collaboration with other countries. China and India have emerged as particularly prominent partners, unrivaled suppliers of intellectual talent to the United States, and U.S. companies are the largest foreign investors in research and development in both countries. In The Conflicted Superpower, Andrew Kennedy explores how the world's most powerful country navigates the policy of its collaboration with these two rising powers.
Whereas China and India have embraced global innovation, policy in the United States is conflicted. Kennedy explains why, through in-depth case studies of U.S. policies toward skilled immigration, foreign students, and offshoring. These make clear that U.S. policy is not strategic but rather the outcome of domestic battles between competing interests. Pressing for openness is the "high-tech community"--the technology firms and research universities that embody U.S. technological leadership. Yet these pro-globalization forces can face resistance from a range of other interests, including labor and anti-immigration groups, and the nature of this resistance powerfully shapes just how open national policy is. Kennedy concludes by asking whether U.S. policies are accelerating or slowing American decline, and considering the prospects for U.S. policymaking in years to come.
Table of Contents 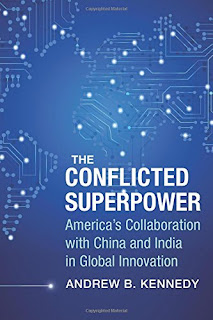 More about the Book
Posted by Anasua Mukherjee Das at 00:05