You are cordially invited to the First Lecture under
Science, Technology, and Innovation Policy (STIP) Forum Lecture Series
(a collaborative initiative of RIS, TERI, CSE, CEFIPRA and IHC)
on
"Sustainable Development: Role of Science, Technology and Innovation"
by
Dr. R. Chidambaram
Principal Scientific Advisor, Government of India & DAE Homi Bhabha Chair Professor
Chair: Dr. Harsh Vardhan
Hon'ble Minister of Science & Technology, Earth Sciences & Minister of Environment, Forest and Climate Change
Date: 26 September 2017, Tuesday | Time: 7.00 PM
Venue: Gulmohar Hall, India Habitat Centre, New Delhi (Entry from Gate No.2)
About the Speaker: Dr. R. Chidambaram is the Principal Scientific Adviser to the Government of India and Chairman of the Scientific Advisory Committee to the Cabinet. He is also a Member of the Prime Minister's Council on Climate Change, Chairman of the High-Level Committee for the National Knowledge Network and a member of the Space Commission. Dr. Chidambaram is one of India's distinguished experimental physicists and he has made outstanding contributions to many aspects of basic science and nuclear technology. Dr. Chidambaram has been awarded the Padma Shri in 1975 and Padma Vibhushan, the second highest civilian award in India, in 1999.
About the Chair: Dr Harsh Vardhan, at present Minister of Science & Technology, Earth Sciences and Minister of Environment, Forest and Climate Change Government of India, was a practicing ENT surgeon before entering public life in 1993. He took over as Minister for Science &Technology and Earth Sciences in November 2014. He is committed to set a roadmap for the implementation of the "Make in India" programme by building a robust R&D infrastructure and promoting synergies between industry and scientific research institutions. The World Health Organisation recognised his contribution to society and awarded him the Director-General's Commendation Medal at a prestigious function held in Rio de Janerio, Brazil, in May 1998.
About the Series: Science Technology and Innovation Policy (STIP) Forum has been initiated with the objective of promoting debate on various aspects of Science, Technology and Innovation Policy. The STIPF will go beyond the disciplinary boundaries by taking into account the intersectionality of Science & Technology and Innovation. It will also bridge the gap between the science and society for dissemination of scientific achievements as well as for generalising debate of societal aspirations and promoting responsible research and innovations. 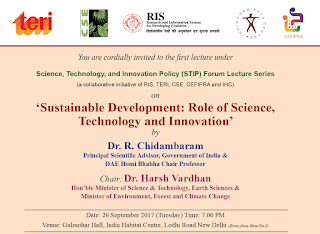