Frugality and Cross-Sectoral Policymaking for Food Security
by Saradindu Bhaduri, Kinsuk Mani Sinha & Peter Knorringa, NJAS - Wageningen Journal of Life Sciences, 2017, DOI: 10.1016/j.njas.2017.08.002.
Abstract: The growing concerns about food security, especially in the disadvantaged regions of the world, often point out the inadequacies of strictly sectoral approaches to addressing the problems of agriculture. Such policy approaches coincided with the rise of a global, top-down, formal, science-driven development of agriculture. Over time, such interventions have drawn criticism from multiple corners as inadequately addressing the need for local variation in institutional contexts. The objective of this paper is to adopt a bottom-up perspective to address the need for cross-sectorality in food security policies. Sustainable Rural Livelihood (SRL) and Grassroots Innovation (GI) are two well recognized schools of thought which emphasize the cross-sectoral approaches to livelihood and local level problem-solving. By embracing a frugality lens, we can offer a conceptual regularity in the patterns of behaviour and decision-making highlighted by the SRL and GI schools of thought. Taking a step further, the frugality lens, by focusing on the usefulness of a decision in the actual environment, emphasizes the need to diagnose local institutions better. Note, however, that the contention of the current paper is not to posit 'top-down' and 'bottom-up' as two competing paradigms. It only argues that a frugality lens helps us to better appreciate the strengths of a bottom-up approach for effective policy formulation, an appreciation of which would promote a dignified marriage between the two perspectives.
Highlights:- The need for a cross sectoral policymaking is suggested to better achieve food security in local contexts. Frugality thinking in policymaking is an important way to achieve such cross-sectorality. Frugality can offer a theoretical framework for discourses on grassroots innovations and Sustainable Rural Livelihood. A frugality lens can ensure diagnosis of local institutions needed for policymaking. Two Kenyan cases were discussed as an illustration. 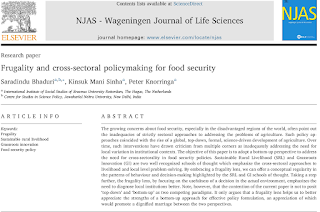