Gujarat Government announces Biotechnology Policy
PTI | December 26, 2016 | http://indiatoday.intoday.in/story/gujarat-government-announces-biotechnology-policy/1/843482.html
Gandhinagar, Dec 26 (PTI): With an aim to establish Gujarat as a preferred destination for manufacturing of biotechnology products, the state government today announced its Biotechnology Policy-2016. The policy has various incentives for investors who are keen to set up their units in the state. Under the policy, the state government would provide capital subsidy up to Rs 25 crore on the total investment for developing a Biotechnology (BT) Park, said Gujarat Deputy Chief Minister Nitin Patel while announcing the policy. In addition, the developer of such park will be eligible for 100 per cent reimbursement of stamp duty paid on sale or lease of the land for setting such park, stated the policy document. BT Park developer will be given 100 per cent reimbursement for electricity duty paid for a period of five years, it added. For individual BT manufacturing units having gross fixed capital investment(GFCI) up to Rs 50 crore, government would give capital subsidy up to Rs 10 per cent of the GFCI with a ceiling of Rs 5 crore. Further, BT units with borrowings up to Rs 50 crore shall be entitled to an interest subsidy at the rate of 5 per cent with a ceiling of 2.5 crore per annum, the document added. To encourage new start-ups in this sector, government would give 100 per cent reimbursement of stamp duty paid on sale or lease of the land for setting such start-up, it added. According to Patel, governments aim is to make Gujarat number one in Biotechnology sector by attracting new investment. "At present, there are 175 BT units in Gujarat having total turnover of Rs 4,500 crore per annum. We are on number three spot in India. Our aim behind bringing this policy is to take this turnover to Rs 15,000 crore within next three-four years and make Gujarat number one in this sector," said Patel. Source.
M S Swaminathan:

Happy to see progress in #biotech policy. Was involved in 1st policies of Gujarat & TN & Chair of India's 1st National Biotechnology Board.
Congratulate the Gujarat government for its new policy on #biotechnology in the state and in appointing a Mission Director. @CMOGuj 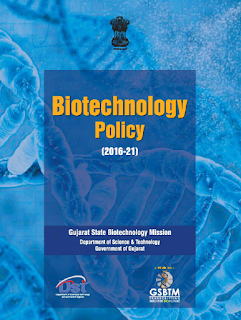