National Productivity Council (under Ministry of Commerce & Industry, Govt. of India) is observing "Productivity Week" during 12th to 18th February, 2017. The theme of productivity week is "Waste to Profit – 3Rs (Reduce, Reuse & Recycle)". A workshop on 3Rs will be organized on 13th February 2017 at NPC Conference Hall, New Delhi. In connection with this, NPC in collaboration with Ministry of Urban Development, Govt. of India has decided to award "Certificates of Excellence in 3Rs" in different categories on 13th February, 2017.

12:00 – 12:30 Role of Municipal Bodies in applying 3Rs towards Swachh Bharat Mission | by Official from Ministry of Urban Development, Govt. of India

12:30 – 13:00 Policy Framework in India for promotion of 3Rs | by Official from Ministry of Environment, Forests & Climate Change, Govt. of India 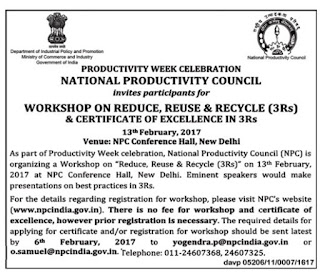 Posted by Anasua Mukherjee Das at 00:15