Table of Contents
Foreword: The Data Revolution
Today's world never faced so many intense challenges as it does now. Soon the Earth's population will have more than tripled in less than a century, requiring us to increase food production by more than 60% in the next few decades. This comes at a time when major obstacles such a climate change, land degradation and loss of agricultural land, due to the expansion of cities, already make it difficult to maintain our current food production.
Yes, we do live in unprecedented times. Unprecedented times require unprecedented measures. Unprecedented times require change.
We need to change the way we do things. We need to increase food production, yes, but we need to increase quality food production, not just volume. We need to make sure the food produced reaches those that need it, and that it does not go to waste. Moreover, and some say more importantly, the world needs not just to be better fed but it also needs to be safer, wealthier, healthier, happier.
The industrial revolution is long gone. Even the Internet revolution and its extraordinary benefits seem to level off. What is the solution then? How are we going to reach our next level of global efficiency? Through open data.
In 1986, approximately 1% of the world's data production was in a digital format. Twenty years later, in 2007, it was 94%. Today, almost the totality of data generation is digital.
This means that we are now for the first time in the history of humanity, in a position to instantly share, disseminate, send masses of information anywhere around the globe (and beyond) at any time.
Data is knowledge; or rather, data may become knowledge once the concepts, the processes, the ideas, the decisions that led to its generation, are extracted and reformulated in a manner that can be understood, analysed, and accessed by everyone. Then data truly becomes knowledge. In turn, through wide dissemination, knowledge allows leaders and individuals alike to make better facts-based, enlightened decisions, leading to better societies and better individual well-being.
Open data is the next revolution. Humanity will be able to build on the gains made from the series of industrial and intellectual revolutions that has led the world to progress to where it is today. Open data allows governments, private sector and civil society for the first time to work together in a true participative manner.
Yes, we do live in unprecedented times. We also live with unprecedented tools, made largely and widely available through open data, examples of which are illustrated in the following pages.
It is now for us to make use of it, for the benefit of all.
André Laperriere, GODAN Executive Director 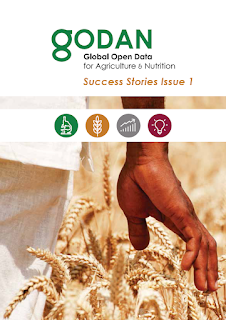