Second CSLG Roundtable on Administrative Tribunals in India: Can Tribunals Deliver Justice?
Date: Tuesday, August 23, 2016
Venue: JNU Convention Centre, New Delhi
Organizer: Centre for the Study of Law and Governance, JNU
CONCEPT NOTE
Administrative tribunals were envisaged as alternative judicial bodies to resolve disputes in specific areas. This was pushed via the infamous, Constitution (Forty-second Amendment) Act, 1976 and was largely criticized as violating the separation of powers principle embedded within the Constitutional framework and an attack on the independence of the judiciary. Since then the Supreme Court has, in several cases viz., S. P. Sampath Kumar v. Union of India; L. Chandra Kumar v. Union of India; Union of India v. R. Gandhi, President, Madras Bar Association; Rajiv Garg v. Union of India; and Madras Bar Association v. Union of India, tried to address jurisdictional disputes between High Courts and these specialized tribunals and also emphasized on the need for strengthening the structural and functional independence of tribunals to curb interference from the executive.
Legal commentators like Arvind P. Datar have criticized this trend towards what he refers to as "tribunalization of the judicial system", wherein the parliament has legislated to establish a number of tribunals, thereby systematically limiting the judicial functions and powers of the High Courts and civil courts. There are three fundamental objections that have been raised. First, despite the various Supreme Court rulings, the executive exercises inordinate control over these tribunals through resource allocations. Second and a related point is that most of these tribunals are inadequately funded and lack the resources to function effectively. Third, these tribunals usually have a limited number of benches thus effectively impeding access to justice.
Panel - 1 will discuss about the tribunal system in India and their functioning with specific emphasis on the questions such as whether tribunals have collectively been able to overcome their birth infirmities and have emerged as valuable parts of the Indian judiciary. Should be a common administrative framework for tribunals in India? The Law Commission has pushed for a series of measures to bring in some measure of uniformity in the selection process, eligibility criteria for appointment and also meeting infrastructure and financial requirements. It has recommended the establishment of a National Tribunal Commission, through which a common cadre based Tribunal service, could be selected. Further all Tribunals service should be placed under the Ministry of Law and Justice, instead of functioning under their nodal ministries.
Panel - 2 will review the functioning of the National Green Tribunal in India. The NGT was established in 2010. Since half a decade of its functioning, there have been a number of important cases that it has adjudicated specifically with reference to urban pollution issues. It has sought to substantively expand its jurisdiction by developing a standard for judicial review for administrative actions. The inclusion of expert members as full Centre for the Study of Law and Governance members of the tribunal has strengthened the expertise deficit that judicial bodies have often found difficult to address. There has been some controversy over whether there is a general rule of exclusion of the writ jurisdiction of the High Court when there is an alternative remedy available. In this context aspects such as the institutional architecture of the NGT, its jurisdiction as well as its substantive jurisprudence on issues such as air pollution, protection of wetlands, groundwater, etc will be discussed.
References:
Law Commission of India (2008), L. Chandra Kumar be revisited by Larger Bench of Supreme Court, Report No. 215.
Rajya Sabha (2015) The Tribunals, Appellate Tribunals and Other Authorities (Conditions of Service) Bill, 2014, Seventy-Fourth Report of the Department Related Parliamentary Standing Committee on Personnel, Public Grievances, Law and Justice. 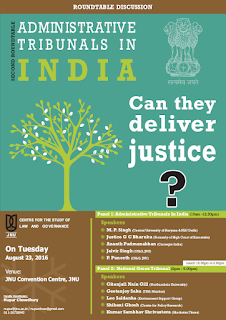