China's Rising Leadership in Science and Technology: Quantitative and Qualitative Indicators
by Aparna Basu, P. Foland, G. Holdridge, RD Shelton; Scientometrics, 2018, 117(1): 249–269.
Abstract: China has a long and proud history of world leadership in science and technology, but in the past two centuries it has experienced a period of instability that has challenged that leadership. However, since its political consolidation in the middle part of the 20th Century and its subsequent economic reforms, China's rise in science has been meteoric. This rise was first detected by the scientometric community through its indicators, but it has now become obvious. Indeed in 2017 the question, "Will China come to lead world science?" was becoming to some, "Does China already lead world science?" This paper tries to make the case that the answer is "yes" (or at least "soon")—but the answer depends on which metrics one considers. China already leads many countries in some measures of GDP, scientific paper production, researchers, plus high technology manufacturing and exports. China also recently passed the European Union in R&D investment. Even in some of those indicators where China has not yet taken the lead, reasonable forecasts predict that it soon will. However, there are some indicators where China is still far behind. For example while rising, it still lags the U.S. and EU in citations in Western publications, and will take years to catch up. Here, these quantitative measures are supplemented by qualitative ones from WTEC assessments and by survey results of scientists and the public, which present a more nuanced conclusion. While Chinese leadership may be difficult for Westerners to accept, it can be viewed as China merely regaining its historical position of leadership in science and technology.
Keywords: World leadership Science Technology China Indicators Peer review 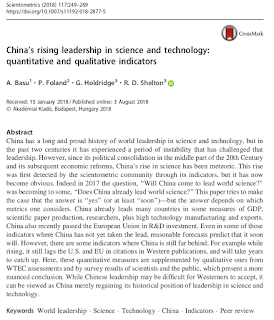