The 2030 Agenda for Sustainable Development recognizes international trade as a generator of inclusive economic growth. It adds value to economies, provides foreign exchange earnings to help finance development and enables job creation, all of which contribute to poverty reduction. Taking advantage of its dynamism, diversity and labor markets has enabled Asia and the Pacific to be competitive in international markets. This is evidenced by the rise in the region's share of global trade and participation in associated value chains.

Like elsewhere, however, the Asia and Pacific region has faced protracted global headwinds since 2007, which has impacted the trade sector and its prospects. This latest Asia-Pacific Trade and Investment Report 2016 highlights that the region's trade flows are wavering amid continued sluggish global economic and trade growth, downward movement of world commodity prices and an uncertain policy environment. These outcomes come at a time when the need for trade growth to support the 2030 Agenda for Sustainable Development is critical.

Even though regional trade did gain some momentum during 2010-2014, the nominal value of Asia and Pacific exports and imports in 2015 experienced a major slump of 9.7 per cent and 15 per cent, respectively. Sluggish growth in trade is expected to continue through to the end of 2016. Forecasts, presented in this Report, do offer hope for a rebound in trade, more so in value, but growth in exports and imports in volume terms will be around 2.2 per cent and 3.8 per cent, respectively.

To its credit, most of Asia's exporting economies have decoupled from the economic cycles in traditional exports markets, like the United States and the European Union, by not only diversifying their export markets but also through boosting domestic consumption and the services sector. Notwithstanding, the region has the potential to lead by example and revitalize its trade momentum, which will be critical to ensuring our future is sustainable and that our societies are more equal.

Concurrent to trade, foreign direct investment (FDI) flows to developing countries have also slowed. FDI flows and regional integration policies have been adversely affected by populist sentiments which have been growing globally. In Asia and the Pacific, growing discontentment with liberalization has to a certain extent been influenced by the inequitable distribution of the benefits of liberalization and rising inequalities. In this context, it is of little surprise that a number of new restrictive trade measures, particularly in G20 countries, were implemented in 2016.

This year's edition of the Asia-Pacific Trade and Investment Report (APTIR) does, however, reveal positive news. With a share of 40%, the Asia-Pacific region is still the largest goods exporting region globally. The region's share in commercial services trade continues to strengthen and restrictiveness of services trade has not increased in the region's economies. Furthermore, the region's active actions towards international investment liberalization helped greenfield FDI inflows grow much faster than the global average. Significant progress was also witnessed in the region's efforts to decrease trade costs, illustrated by the Framework Agreement on Facilitation of Cross-border Paperless Trade in Asia and the Pacific. A significant number of economies in our region have also already ratified the WTO Trade Facilitation Agreement, with the 12 remaining Asia-Pacific economies on track to ratify the Agreement soon.

In addition to these developments, Asia and the Pacific also witnessed the first signs of some consolidation among the preferential trade activities in the region. Nevertheless, after the results of the recent United States election, it appears that at least one of the mega-regional agreements signed in 2016, has an uncertain future. This is disappointing, and represents a considerable loss in terms of time and costs for the countries that were involved in negotiating this agreement. Moving forward, these developments may, however, allow the region's economies to focus more on South-South integration and enable them to promote trade and investment linkages suited to their development aspirations.

I recommend the Asia-Pacific Trade and Investment Report 2016: Recent Trends and Developments to all Governments, development partners and other stakeholders. Together with 5 sub-regional and almost 30 country trade briefs, this Report offers comprehensive evidence that will help in the introduction of well-informed trade and investment trends and policies across the region. Given that the short-term prospects for international trade are not promising, the changing patterns and prospects outlined in this Report highlight that achieving the 2030 Agenda will require the continued and dedicated efforts of our region's economies to create a strong, vibrant and enabling environment for international trade and investment.

Shamshad Akhtar | Under-Secretary-General of the United Nations | Executive Secretary, United Nations Economic and Social Commission for Asia and the Pacific

Chapter 4. Trade Facilitation in Asia and the Pacific: An Update 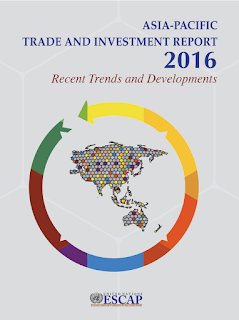