Preamble
The India National Report is a sequel to resolution 24/14 of the UN Habitat Governing Council, adopted in its twenty-fourth session by which the Council invited its member states to prepare national reports on the "implementation of the Habitat-II agenda and of the other relevant internationally agreed goals and targets as well as new challenges, emerging trends, and a prospective vision for sustainable human settlements and urban development". Since the adoption of Habitat II agenda in 1996, India's urban sector has witnessed important changes, and, in many ways, has posted departures from the earlier ways of looking at urbanization in the country's growth and development processes. First, between 1996 and 2015, India has added approximately 171 million people to its urban population base. Its urban footprints have expanded to 7,933 settlements, several of which are "census towns," i.e., settlements that have the required urban characteristics but have structures of rural governance. Economic composition as represented by the Gross Domestic Product (GDP) has decisively changed in favour of non-primary-sector activities, especially the services sector which currently contributes over 55 per cent to the GDP. Second, between 2004–05 and 2011–12 India has lifted over 15 million persons out of poverty in the urban areas; likewise, the proportion of slum population has dipped to 17.4 per cent within a decade. Infrastructure and services now reach out to 75 per cent in case of water and 81 per cent in case of latrines. However, at the same time, challenges in the form of service deficits persist. Also, the structures of governance and financial systems have not kept pace with the changes in the demographic and economic compositions and the levels of urbanization.
India explicitly recognizes the role and importance of urbanization and cities in the process of its socio-economic transformation, and affirms its commitment to the larger goals of urban equity and eradication of poverty; inclusive urban prosperity and opportunities for all; productivity, competitiveness, diversification and innovation; and urban resilience. Its current approach to urbanization is focussed on several objectives: (i) urbanization must generate growth and enhance economic productivity and competitiveness; (ii) it should be inclusive and sustainable; (iii) it should aim at preservation and revitalization of history, culture and heritage; and (iv) it should contribute to the development of rural areas and strengthen ruralurban interdependencies. Consistent with these goals and objectives, the Government of India has launched a number of missions, the key ones being the Smart Cities Mission, Atal Mission for Rejuvenation of Urban Transformation (AMRUT), Swachh Bharat (Clean India) Mission, Pradhan Mantri Awas Yojana- Housing For All (HFA), Heritage City Development and Augmentation Yojana (HRIDAY), and Rurban Mission. This report lays out a brief account of the state of the urban sector and the challenges and complexities it faces, and outlines the initiatives and strategies that have been taken to address these.
The India National Report consists of seven chapters. Chapter 1 provides an assessment of the urbanization trends in the country, focussing on how the trends are being shaped, on the one hand, by domestic priorities such as the accelerated development of rural areas and the need to forge stronger urban-rural linkages, and on the other hand, by factors driven by competition between cities for improved productivity and economic vibrancy. Chapters 2-4 outline the developments and challenges in the spheres of urban land and housing market, urban environment, infrastructure and services. The governance and financing systems of cities (urban local bodies) are discussed in chapters 5 and 6, referring especially to putting in place a strong system of inter-governmental system of transfers, increased local government autonomy, a focussed use of the nascent but growing capital market for financing priority infrastructure services and the development of public-private partnership facility. Chapter 7 gives an account of the urban initiatives and a perspective vision for the new urban agenda, affirming its commitment to the new international benchmarks as embodied in the Sustainable Development Goals (SDGs), the Paris Agreement on climate change. 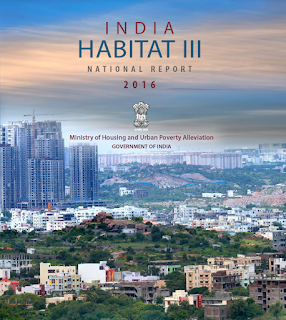