7-11 December 2016
Call for Papers: Submission of Abstract till October 31, 2016
Science for the Masses: Today in India as many as 833 million Indians, or 69% of the population, live in rural areas, with persisting structural problems such as, agriculture, health, water, sanitation, housing etc. A large part of rural India is looking forward to better times along with the rest of India. On the other hand, having a significant percentage of population in the youth category India's demographic dividend is also a global talking point as well. All these necessitate that, the country continuously strives for growth and development through investment in science and research. In this background, the Ministry of Science & Technology and Earth Sciences, Govt. of India and Vijnana Bharati, have planned to organise the 2nd IISF-2016 jointly at CSIR-NPL & IARI campus from December 7-11, 2016.

About IISF 2016
The series of India International Science Festival (IISF) is an integral part of India's long term vision in developing and widening the spectrum of scientific temper in India and abroad. To display India's contribution in the field of S&T and to motivate the young scientists to find solutions to the burning issues of our society; the 1st IISF was held at Indian Institute of Technology (IIT) New Delhi in December, 2015.The festival primarily aimed to involve and include commoners with a view to improve their scientific understanding, temperament and appreciation for various feats in science & technology by showcasing Indian achievements. Indeed, the event was a great success with the participation of more than 3000 young scientists across the country. The mega S&T expo attracted more than 3 Lakh people. VIBHA has become the Guinness Book World Record Holder for the successful conduct of the 'Largest Practical Science Lesson' by 2000 students from prestigious schools of Delhi. 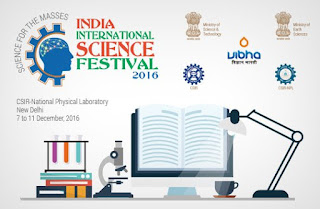 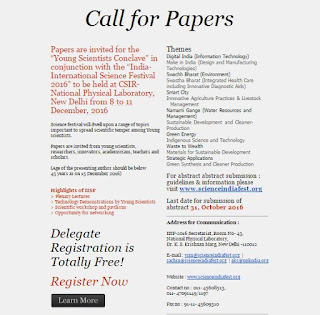