The National Sample Survey Office (NSSO), Ministry of Statistics and Programme Implementation has released the report titled "Key Indicators of Household Expenditure on Services and Durable Goods" based on the related information collected during July, 2014 to June 2015 as part of NSS 72nd Round.  This survey on household expenditure on services and durable goods was the first focused survey of its kind undertaken by National Sample Survey Office.
The survey was designed to collect some demographic particulars, detailed information on household expenditure on transport, miscellaneous consumer services, food expenditures incurred in hotel & restaurants, expenditure on repair & maintenance services availed, hotel lodging charges, and on durable goods other than those used exclusively for entrepreneurial activity in India through a nationwide household survey.
As household expenditure on services forms an important part of Private Final Consumption Expenditure (PFCE), this focused survey is expected to provide improved estimates of household expenditure on the services as compared to the same based on data collected through usual Consumer Expenditure Survey. Also, in this survey, an attempt has been made to apportion the expenditure by the households on durable goods, when the durables are used both for household consumptions and enterprises.
The survey covered the whole of the Indian Union. The results of the survey are based on the sample, canvassed by NSSO, consisting of 7,969 villages and 6,048 urban blocks, spread over all States and Union Territories of the country. The schedule was canvassed in 47,535 households in rural areas and 36,065 households in urban areas during the period July, 2014 –June, 2015.
Some key findings on various aspects of Household Expenditure on Services and Durable Goods in the country as obtained from the survey during July, 2014 - June, 2015 are as follows:

I. Transport Services
II. Miscellaneous Consumer Services
III. Other Services
IV. Durable goods
The publication based on above cited Key Indicators is available on the website of the Ministry of Statistics and Programme Implementation.
Source: http://pib.nic.in/newsite/PrintRelease.aspx?relid=146590 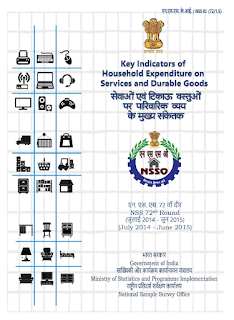