About the Book
Bharat Ratna, Dr APJ Abdul Kalam (1931-2015) rose from humble beginnings to become India's top missile and space scientist and its first technocrat President (2002-2007). Earlier, the former President was actively involved in India's civilian space programme and defence missile development efforts. Dr Kalam, a political to the core, endeared himself to the youth, particularly students, with his almost evangelical-type appeal to strive for creativity, righteousness and courage. Even eight years after he left his august address, he continued to shower students and citizens alike, within India as well as abroad, ignited their minds with his innovative ideas and theories. He collapsed while delivering a talk on the livable planet earth, at the IIM Shillong, on 27 July 2015 at the age of 83. He was a great son of India. This book is a collection of glorious tributes paid by his fellow scientists, technocrats and colleagues, political leaders, media professionals, friends and admirers touching upon the various facets of his life and work and his contributions as a defence and space scientist, administrator, educator, author, great human being etc. He gave wings to their dreams. A very useful and inspiring book for the younger generations, students, researchers, historians of science, policy-planners, libraries etc., providing them with an insight into the life and work of the noble soul Bharat Ratna Dr. APJ Abdul Kalam, as well as his patriotic feelings for carrying out the indigenous scientific and technological efforts towards the socio-economic development of India of the 21st century. He dreamt of India to emerge as a developed nation by 2020. Dr. Kalam will be a role model for millions of young men and women in the country fired by the ambition of achieving greater things in life.

About the Author
Dr. Pawan Sikka (b. 1944) is a former Scientist-G/ Advisor, Government of India, Ministry/Department of Science and Technology, (DST) New Delhi, and has had held various senior technical positions there, during his dynamic years, 1974-2004. Dr Sikka received the benefit of Dr. APJ Abdul Kalam's guidance, during 1995-2002, in the preparation of India: Vision 2020 technical reports, by the Technology Information Forecasting Assessment Council (TIFAC), as well as the promotion of indigenous technology towards their commercialization and wider domestic applications in India, at the Technology Development Board (TDB), New Delhi. He has received his MSc, PhD and DSc degrees in Physics. As a British scholar, he was awarded the Visiting Fellowship, for the academic year 1984-85, for studying the management of new science and technology policy related issues, at the University of Oxford, Oxford, UK. Dr Sikka is a well-known science and technology policy analyst and is widely published and travelled in India and abroad. 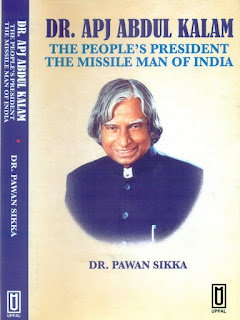 Posted by Anasua Mukherjee Das at 00:08