BRICs and Beyond | by Goldman Sachs Global Economics Group, 2007 | A classic book on BRICS Economies

by Goldman Sachs Global Economics Group, the Goldman Sachs, USA, 2007.
Abstract: This is a collection of research papers on the BRICs phenomenon and its impact on the global economy. The Goldman Sachs Global Economics Department released book titled "BRICs and Beyond" in 2007. This book compiles their research on the BRICs - Brazil, Russia, India and China - and the changing nature of the global economy. It is now six years since they coined the term 'BRIC' in their Global Economics Paper, 'Building Better Global Economic BRICs', published on November 30, 2001. Since then, these countries' equity markets have seen a remarkable increase in their value: Brazil has risen by 369%, India by 499%, Russia by 630%, and China by 201%, using the A-share market, or by a stunning 817% based on the HSCEI.

Table of Contents
Section One: The BRICs
Chapter 1: India's Rising Growth Potential
Chapter 2: Russia: A Smooth Political Transition
Chapter 3: Will China Grow Old Before Getting Rich?
Chapter 4: China's Investment Strength Is Sustainable
Chapter 5: The 'B' in BRICs: Unlocking Brazil's Growth Potential
Chapter 6: You Reap What You Sow: Our 2006 Growth Environment Scores
Chapter 7: Why the BRICs Dream Won't Be Green
Chapter 8: Why the BRICs Dream Should Be Green
Chapter 9: Building the BRICs: Infrastructure Opportunities
Chapter 10: Women Hold Up Half the Sky
Section Two: Beyond the BRICs
Chapter 11: The N-11: More Than an Acronym
Chapter 12: Current Answers (and Questions) about BRICs and the N-11
Chapter 13: Beyond the BRICS: A Look at the 'Next 11'
Chapter 14: The GCC Dream: Between the BRICs and the Developed World
Section Three: The New Global Markets
Chapter 15: Bonding the BRICs: The Ascent of China's Debt Capital Market
Chapter 16: Bonding the BRICs: A Big Chance for India's Debt Capital Market
Chapter 17: Is Wall Street Doomed?
Chapter 18: Sovereign Wealth Funds Highlight the Changing World
Chapter 19: Globalisation and Disinflation: Can Anyone Else 'Do A China'?
Chapter 20: BRICs and Global Commodities Markets
Chapter 21: Food, Glorious Food: Agricultural Commodities
Download Full-text PDF 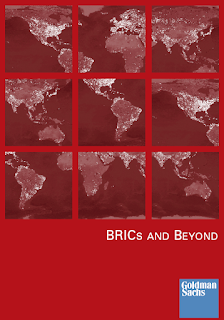 Posted by Anasua Mukherjee Das at 06:42