New Book
National Industrial Policy of India: New Initiatives of the Government, Public Policy & Governance in India
by Pawan Sikka, 2017, Synergy Books India, ISBN 9789382059660.
About the Book
National policies, strategies and promotional measures adopted earlier in the 20th century by the Government, since the last industrial policy was enacted in 1991, for the industrial growth in India cannot now deliver the meaningful results, import and export targets, economic growth parameters, etc. in the 21st century. The introduction of ICT (information and communication technology) as well as the new initiatives of the Government, i.e., Make in India, Skill India, Start-Ups, Digital India, etc. besides the enactment of Goods and Service Tax (GST) Bill 2016/17 have further enhanced desires of meeting the rising expectations and challenges of the domestic and foreign markets of "Make in India" products.
A need has been emphasized in this book "National Industrial Policy of India: New Initiatives of the Government, Public Policy & Governance in India", for the early formulation and enactment of a new National Industrial Policy, say in 2017, with a forward looking approach, towards catching-up of the new and emerging scenarios of the industrial developments in India and abroad in the millennium.
About the Author
Dr. Pawan Sikka (b. 1944) is a former Scientist-G/ Adviser, Government of India, Ministry/Department of Science and Technology, New Delhi, where he served in various senior positions, during 1974-2004. He received his M.Sc., PhD as well as D.Sc. degrees in Physics and Fellowship (Science Policy Studies), University of Oxford, Oxford, United Kingdom. He is also a recipient of UNESCO, Italian, German and Swiss government scholarships for pursuing further studies there. He is best known for his contributions to Science Policy studies, in India and abroad. He is a life member of the Semiconductor Society of India, Materials Research Society of India, Association of British Scholars, and Oxford and Cambridge Society of India. 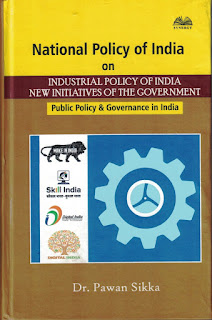