New White Paper "India as an Innovation Economy: Role of IP and ICT" | by EBTC & ICRIER

India as an Innovation Economy: Role of IP and ICT
by Arpita Mukherjee, Alka Chawla, Avantika Kapoor, Judith Weinberger-Singh, and Vernika Garg; European Business and Technology Centre (EBTC) and Indian Council for Research on International Economic Relations (ICRIER), New Delhi, 2018.
About the White Paper
India has several advantages including one of the fastest growing markets, third largest group of scientists and technicians in the world, one of the lowest costs of telephone calls and Internet, and supporting government policies, that can facilitate its journey towards an Innovation Economy. The country's ranking in the Global Innovation Index of the World Intellectual Property Organization (WIPO) among 130 countries improved from 81 in 2015 to 60 in 2017. There has been an increase in patent filings in the last three years. The country has signed over 100 Memoranda of Understanding with a number of countries including many European Union (EU) Member States to strengthen research and development (R&D), innovation and startup ecosystems. All these factors will contribute in the journey towards an Innovation Economy.
Given this background, the White Paper focuses on the role of two key pillars of an Innovation Economy - information and communications technology (ICT) and intellectual property (IP), and discusses how they can help to enhance India's positioning as a global hub for innovation and technology development, bring in investment, and create high quality jobs. It compares India vis-à-vis other developed and developing countries in some key innovation indices, identifies the gaps, and suggests how the EU, its Member States and European institutions can contribute through mutually beneficial partnerships in India's journey towards becoming an Innovation Economy. The paper makes several recommendations to the Indian government which, if implemented, will help to fast track the journey towards an Innovation Economy.
Table of Contents 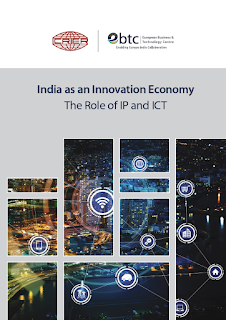