India: Three Year Action Agenda, 2017-18 to 2019-20
by NITI Aayog, New Delhi, 2017.
Preface
On 1st January 2015, the National Institution for Transforming India or NITI Aayog came into existence as the government's premier think tank. Subsequently, vide Office Order dated 09/05/2016 (Annexure 1), the Prime Minister's Office advised the NITI Aayog to prepare Fifteen Year Vision, Seven Year Strategy and Three Year Action Agenda documents. Accordingly, the present document is being published to recommend policy changes and programmes for action from 2017-18 to 2019-20, the last three years of the Fourteenth Finance Commission. A second document containing the Fifteen Year Vision and Seven Year Strategy is currently under preparation at the NITI Aayog.
The Vision, Strategy and Action Agenda exercise represents a departure from the Five Year Plan process, followed with a handful of discontinuities until the fiscal year 2016-17. The 12th Five Year Plan was the last of these plans. It has been felt that with an increasingly open and liberalized economy, we needed to rethink the tools and approaches to conceptualizing the development process. The proposed shift represents an important step in this direction.
The Action Agenda has been prepared as an integral part of the exercise leading to the Vision and Strategy document. It has been fast tracked and released first, keeping in view that with the start of fiscal year 2016-17, it is of immediate relevance for policy implementation. Work on the Vision and Strategy document is already far advanced.
The Three Year Action Agenda offers ambitious proposals for policy changes within a relatively short period. It is understood that while some may be fully implemented during the three-year period, implementation of others would continue into the subsequent years. Where relevant, we have included possible actions by the states to complement the efforts of the Centre.
For holistic development, all ministries and departments must progress simultaneously and harmoniously. Therefore, as a roadmap for future progress, the Action Agenda attempts to cover nearly all aspects of the economy. Despite this wide coverage, an effort has been made to present all action points with the utmost clarity. To ensure that the document does not become unduly long, however, we have deliberately refrained from providing the detailed rationale for each proposed action. Where appropriate and necessary, we propose to undertake this latter task in the Vision and Strategy document.
The Action Agenda is the result of the hard work and efforts of a vast number of individuals and institutions. The NITI Aayog has been lucky to have three world-renowned scholars as its Members: Shri Bibek Debroy, Dr. V. K. Saraswat and Dr. Ramesh Chand. It also has a number of outstanding Advisers leading its work in different areas of policy. Working under the guidance of the Members, the Advisers and their teams prepared the core inputs that formed the backbone of the final document. I greatly appreciate the contributions of the Members, Advisers and their teams to the Action Agenda.
Inputs were also sought and received from State Governments, Union Territories and Ministries of the Central Government. Extensive consultations were held with groups of scientists, economists, journalists, voluntary organisations, industry associations and experts in education, health, culture, transport and other fields. Many outside experts also provided extremely useful written inputs. Annexure 2 at the end of the document lists the outside experts exhaustively with the hope that I have not missed anyone. I sincerely thank the states, union territories, Ministries, outside experts and institutions for the gift of their ideas and time.
Shri Amitabh Kant, the Chief Executive Officer of the NITI Aayog, skilfully steered the entire process to its logical conclusion. The task simply could not have been completed without his leadership in navigating and guiding all those involved throughout the process. I am deeply appreciative of the energy and time he generously provided.
A dedicated team of six talented young policy analysts, who recently joined the NITI Aayog, worked under my close direction to convert the inputs provided by the Advisers and outside experts into a unified document. They are: Chinmaya Goyal, Atisha Kumar, Urvashi Prasad, Vaibhav Kapoor, Rahul Ahluwalia and Devashish Dhar. This part of the exercise consisted of preparation of different chapters, fitting them into a single whole and revising the draft multiple times. The process also included several discussions lasting hours. Atisha and Chinmaya jointly performed the key functions of coordination and editing of the document throughout the process. It was a real pleasure for me working with this brilliant, energetic and enthusiastic team of young analysts.
Pavithra Rangan oversaw the publication and production of the document. My office staff, headed by Dr. Prem Singh, provided critical logistical support. Prem not only saw to it that all went smoothly but also provided critical intellectual inputs at all stages of the work.
In draft form, the Action Agenda was circulated to all members of the Governing Council of the NITI Aayog at its third meeting on 23rd April 2017. Subsequently, several states and their Chief Ministers provided comments on that draft document. A concerted effort has been made to incorporate these inputs as well as the remarks made by the Chief Ministers at the Governing Council meeting in this final version.
It is hoped that the Three Year Action Agenda will help launch a new phase in our journey towards a New India.
Arvind Panagariya | Vice Chairman | New Delhi | 1 August 2017
Table of Contents 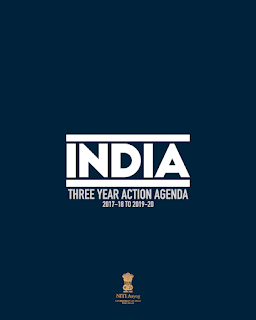