Science in Pre-Independent India: A Scientometric Perspective
by Swapan Kumar Patra and Mammo Muchie
Annals of Library and Information Studies, 2017, 64(2), 125-136.
Abstract: Scientific publications and different types of collaboration pattern in pre-independent India are mapped using scientometrics and social network analysis tools. Publication data of Indian authors published before 1947 are downloaded from the Scopus database of Elsevier science. The study traces the literature growth patterns, core journals, productive authors, authorship collaboration patterns, productive institutions and their collaboration patterns. The result shows that maximum literature was published in the year 1936. The growth of publications during the mid-1930s was evident as many scientific institutions were established by that time. The subject-wise maximum activity was observed in chemistry followed by agricultural and biological science. Proceedings of the Indian Academy of Sciences was the most preferred journals. Universities played the prominent role in scientific research. Some private institutions with 'nationalistic' enthusiasm, for example, Indian Institute of Science and Indian Institute for Cultivation of Science were very productive institutions and also prominent in institutional collaboration. These institutions started in the colonial period continue to be the pillars of modern science in India.
Keywords: Colonial Science;Scientometrics;India;Social Network Analysis;History of Science 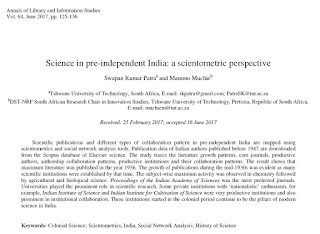