Demonetisation Decoded: A Critique of India's Currency Experiment
by Jayati Ghosh, C. P. Chandrasekhar, Prabhat Patnaik. Routledge India, 2017, Hardback, ISBN: 9781138080713, INR 350.00.
About the Book
On the night of 8 November 2016, at 8:15 pm, India's Prime Minister, Narendra Modi, announced in a televised broadcast to the nation that with effect from midnight, currency notes of denominations Rs 500 and Rs 1,000 would no longer be legal tender. In one stroke, this involved the de-recognition of over 86 per cent of the value of Indian currency in circulation with only four hours' notice.
This important book provides a quick and concise explanation of the goals, implications, initial effects and the political economy of this major demonetisation move by the Government of India. It clarifies key concepts and offers astute economic analysis to guide the reader through the various claims, arguments and critiques that have been made; highlights the complexities of the processes that have been unleashed; and examines the likely outcomes in the long term as well as those that are immediately evident.
Timely and lucid, this book will interest students and researchers in the fields of economics, finance, management, law, politics and governance as well as policy makers, legislators, civil society activists and the media.
Table of Contents 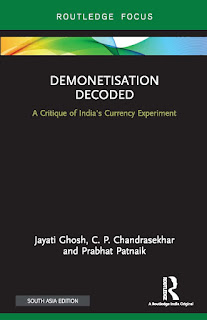