New Book | Environmental Sustainability from the Himalayas to the Oceans: Struggles and Innovations in China and India | ed by Dong, Bandyopadhyay, & Chaturvedi

Environmental Sustainability from the Himalayas to the Oceans: Struggles and Innovations in China and India
Edited by Shikui Dong, Jayanta Bandyopadhyay, and  Sanjay Chaturvedi, Springer International Publishing, 2017, 258 pages, ISBN 9783319440354.
About this Book
The book is written in the backdrop of the environmental impacts of and future requirements from the natural environment for rapid economic growth that has characterized recent economic history of China and India, especially over the past few decades. The environmental impacts of such rapid economic changes have been, more frequently than otherwise, degrading in character. Environmental impacts of economic activities create degraded natural ecosystems by over utilization of nature's provisioning ecosystem services (from Himalaya to the Ocean), as well, by the use of the natural environment as sink for dumping of unmarketable products or unused inputs of economic activities. Such processes affect wide range of ecosystem processes on which the natural environment including human population depend on. Critical perspectives cast by various chapters in this book draw attention to the various ways in which space and power interact to produce diverse geographies of sustainability in a globalizing world. They also address the questions such as who decides what kind of a spatial arrangement of political power is needed for sustaining the environment. Who stands to gain (or lose) what, when, where, and why from certain geographical areas being demarcated as ecologically unique, fragile and vulnerable environments? Whose needs and values are being catered to by a given ecosystem service? What is the scope for critical inquiry into the ways in which the environment is imagined, represented and resisted in both geopolitical struggles and everyday life? The book provides insights to both academics from diverse disciplines and policy makers, civil society actors interested in mutual exchange of knowledge between China and India.
About the authors
Table of Contents 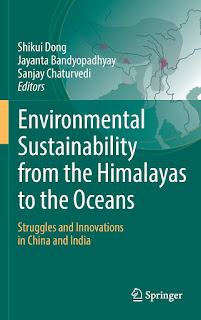